Just go and read this excellent post by Alhamedi. The best thing of it, is the end.

Between 150,000 and 400,000 people live in polygamous households in France, in which a man is married to more than one woman. The French state is trying to change the situation — with mixed results.

The government argues that living in polygamy prevents immigrants from becoming integrated into French society and that it goes against the principles of gender equality enshrined in the constitution. Polygamy was made illegal in France in 1993. Those who still live in polygamy have either been doing so since before the law was passed or they married abroad.

Though polygamy isn’t very common in the northern Paris suburb of Cergy, most people in the African community there seem to know at least one polygamous family, usually with roots in Mali.

“I’m against polygamy, even though I’m African,” explained Kofi Jumeau, who, along with his 43 brothers and sisters, could speak from first-hand experience. “My father had between nine and 11 wives. And unfortunately it really hurt us kids, because there was no family cohesion. It was really bad for us.”

The French authorities employ a strategy they call “de-cohabitation” to reduce the numbers of polygamous households. It involves social workers helping second and third wives move into separate apartments with their children, breaking up the polygamous arrangement.

[…] Parliamentarian Chantal Brunel has taken up the issue and would like the government to be more aggressive in dealing with it. “I think we have to send a strong message to other countries and to foreigners who live here and don’t respect the laws on our soil. Polygamy is completely illegal in France, and yet it exists.”

Brunel sponsored legislation last year calling for state tutors to manage the welfare benefits of polygamous families. Though the bill didn’t pass, she did manage to draw attention to the issue of polygamy and continued to lobby her colleagues for more action in tackling it. There’s now a growing sense that France’s current policy isn’t working, and that the country needs to take a tougher stance if it wants polygamy to become a thing of the past.

If we study the consequences of the polygamous weddings in France, we can distinguish between the ones which are made in France -not recognised but for some very limited effects- and the ones who are made outside France, who in general are recognised as valid, except when the man is married to a French woman. So the inmediate consequence is that they are promoting the polygamous weddings with foreign women who are not aware of their rights and normally do not even speak French.

It’s not very strange then the system is not working,

The result of an extensive research and five months of field interviews in numerous schools in 20 French provinces by a distinguished group of educators, the Obin report documents the extensive Islamization of French schools in the vicinity of Moslem ghettoes and the imposition of strict conformity with Islamist dictates through violence and intimidation.

Having by and large completed their takeover of the Moslem ghettoes, often by “targeted violence” against non-Moslems and moderate Moslems alike, the Islamist fanatics are making great progress towards achieving control of the educational system as well.

As usual, girls are the first victims of religious extremism. The “big brothers,” as the Islamists are known in school, enforce a strict Islamic dress code which prohibits make-up, dresses and skirts, forbid any co-educational activities and make going to the movies, the swimming pool or the gym all but impossible for Moslem girls.

The punishment for refusal to conform is often physical violence and beatings. And this, says the report, is a relatively protected environment compared to “what girls experience outside of school.” Such as forced marriages at 14 or 15.

You can read the entire article at France-Echos.

The Australian rapists who blame their Pakistani-Muslim culture

A New South Wales Supreme Court judge has rejected a claim by a Sydney gang-rapist that his strict Pakistani upbringing meant he did not know his actions were wrong.

Justice Peter Hidden has today sentenced two Sydney brothers, who can only be known as MSK and MAK, for a range of sexual assaults against two teenage girls at the brothers’ home in Ashfield in 2002.

The brothers are already serving lengthy sentences for the gang-rape of two other teenage girls and MSK will now serve up to 28 years in jail, and MAK will serve up to 19 years.

MSK claimed his family’s strict moral and cultural upbringing in Pakistan explained his offences, which has angered one of his victims, Tegan Wagner.

“This wasn’t about culture, this is about abuse against women and the fact that they had the nerve to bring in culture to begin with just astounds me,” she said.

Just in case someone does not agree with the “Muslim” in the title you can read these posts:

The racist reason is given by the rapists themselves. The problem is that nothing is being done to prevent others doing the same. In the case of these rapers:

Sister Toldjah has several posts on the subject. but one of them is extraordinary:

A violent gang rapist should have been given a lesser sentence

partly because he was a “cultural time bomb” whose attacks were inevitable, as he had emigrated from a country with traditional views of women, his barrister has argued. MSK, who, with his three Pakistani brothers, raped several girls at their Ashfield family home over six months in 2002, was affected by “cultural conditioning … in the context of intoxification”, Stephen Odgers, SC, told the NSW Court of Criminal Appeal yesterday.

when he mouthed “I’m sorry”. According to the SMH;

Ms Wagner laughed and gave him the finger. When the court adjourned, she stood up, faced him and said: “F— you! Go to hell, mate.”

“I’ve been waiting four years to do that,” she said. Now 18, Ms Wagner then
took the extraordinary step of allowing her identity to be made public. Outside court, she said: “I’d like to say, have fun in prison, boys. I won.”

While the use of the “Islamic” defense for gang rape is obviously ludicrous (Islam does not sanction rape), modern Islam, particularly how it is practiced and integrated into tribal societies, is brutal and does not hold women in high esteem (at least from my decadent, morally bankrupt, Western Crusader point-of-view). Women who have sex (as well as men) outside of marriage are to be whipped 100 times (from “The Light” 24.2), while adulteresses get stoned (Sunnah, Translation of Sahih Bukhari, Volume 2, Book 23, Number 413).

The terrible reality is that MSK is right (in Spanish, I translate only a part of it):

In some parts of Pakistan, the sexual assault -rape included- is officially authorised as a legitime way to implement the system of social values.

The Council of a little village ordered reciently that 5 teenagers should be “kidanpped, raped or murdered” because their negative to be treated as material things.

Their ages were between 6 and 13 when they were married against their will to pay a family debt, There is also the case of Mukhtar Mai: when it was presumed that her brother, aged 12, had comitted an offense in a little agricultural village, the council ordered his sister should be group-raped. So, she was carried to a hut where she was raped by four men repeatedly.

According to the Human Rights Commission of Pakistan, there were 804 cases of these type of rapes officially orchestrated in 2000 and 434 of them were group-rapes. But the worst thing is that the victims of these atrocities chould commit suicide, because the victims of rape are an irreparable damage to their families.

So when MSK committed the rapes he was only perpetuating his own cultural inheritance. He is proud of a society in which the sexual violence is officially condoned and used commonly as a tool to subdue the women even more.

Gateway Pundit has the wonderful news. Here are some photos: 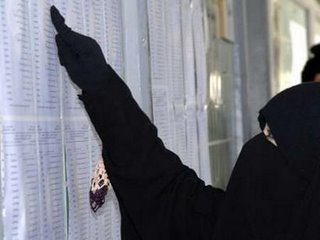 But of course there are people that think that theKuwaiti State has become far too progressive. I see those women that can barely see the lists in which their names are listed to vote and, yes, far too progresive is what they are indeed.

The new source of Muslim outrage

It's a song sang

by these four Chechen girls, titled "Eastern Fairy Tale". The lyrics of this song run: "Do you want to be my fourth wife? Yeah, if you are my sixth husband". In the video, a boy asks the question and the group leader just answers.

And there comes the real problem: the President of the Russian Islamic Comitee, Gaydar Dzhemal, has declared that the video is inmoral, because the "girls appear [in the video] as Muslims [he says Middle East Women] and because of that, they have ofended to all Muslim women by spreading the offensive idea that is possible to have more than one husband".

A Chechen singer (that is, Muslim Chechen singer) has declared also that the video is offensive to Muslim sensibility and has caused a lot of "anguish and uneasiness".

Where is the sense of humour of a very important part of the Muslims that has been lost in so distant places that they cannot reach for it? It's a SONG, for God's sake….

Throwing stones at girls dressed “too sexy”: Sharia in France.

xchange to Saine-Saint-Denis. But to the eyes of the “jeunes” of the neighborhood (“young people”, another expression to designate people com 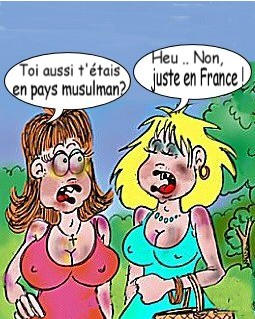 ing from immigration, copyright political correctness) they were dressed a little bit too “sexy”. The gang of “jeunes” therefore started to throw them stones.

The “jeunes” stones throwers reproached them to dress in a shocking way, and especially to wear skirts. Interviewed by the journalist, some Arabic girls spoke of provocation :

–“We don’t want them to come in our neighborhood dressed like bitches”.

Hmm, where were the policemen, "les gendarmes"? What would have happened if these girls would have been badly hurt? I am amazed at these kind of news…

-you also have been in a Muslim country, haven't you?