The Egyptian counter-attack to the cartoons

I read it at Rantings of a Sandmonkey.

The Syndicate of Egyptian cartoonists decided that they would respond to the danish cartoons by making their own cartoons on what happend. They were done in order to- and I quote- " as a response to those who fell under the thrall of racism, forgery and crime", and were printed in a 2 page spread in Al Fagr newspaper, probably as a way to redeem the fact that they were the ones wh 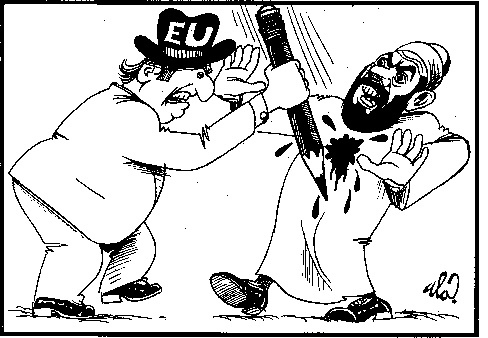 Of all of them I am going to post only the 2 which are the most "extraordinary" from my point of view.

The number one (above) depicts a Western man that represen

ts the EU, hurting a defenseless Arab with a pencil.

And of course the Anti-Semitism has also a place in this collection:

This one is showing a pig drawing the cartoon while saying saracsticly: "What is it? What's wrong? You never heard of something called Freedom of Expression? Hahahahahahaha". Please note the star of david hanging on the wall behind him.

You can see more at Sandmonkey's blog.

The Definition of Incitement

French authorities are fond of accusing media in other countries of "incitement". As I discussed on the old Trans-Int, French Minister of Defense Michelle Alliot-Marie brandished the charge, for instance, when Ivorian media in November 2004 reported on a massacre of Ivorian civilians by the French military. Some weeks later, nonetheless, Alliot-Marie would be forced to concede that Ivorian civilians had indeed been killed by French fire. (For a look back on the so-called "Hotel Ivoire" incident on its one-year anniversary, see my "The Black Tuesday of the French Army".) But these same authorities do nothing to control incitement in France's own state-owned media – notably anti-American and anti-Israeli incitement: such, for instance, as that constituted by the infamous France2 report of the alleged Israeli killing of the 12-year-old "boy-martyr" Muhammad al-Dura at Netzarim Junction on September 30, 2000. Though France2 officials have in the meanwhile admitted that their attribution of the boy's death to Israeli Army fire was likely erroneous, France2 has yet to broadcast a public rectification or seriously to address the doubts concerning the authenticity of the France2 video footage that allegedly documented the episode. (For details, see the Trans-Int Dossier on the "Al-Dura/France2 Affair" .)

READ the rest at the Transatlantic Intelligencer. Very important.

The faces of Youssouf’s accomplices 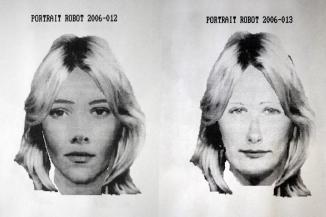 These are the faces of the Youssouf's accomplices. Youssouf is the chief of "the barbares", the gang who tortured and killed Ilan Hallimi. END_OF_DOCUMENT_TOKEN_TO_BE_REPLACED

The future of France

How on earth is going to survive a country where their own "youths" are calling to handle the country to the foreigners?

[…] some gangs joined the demonstration. Gangs of "youths", this time the ones that made Parisian suburbs burn last November (after all, if the co-Allah-bobos burn cars in the streets of the capital city, you really thought the "youths" wouldn't want to join them?). Mostly young people from Africa again from what we've seen (one member of the BAF tried to film them and was advised not-so-kindly not to use his camera). 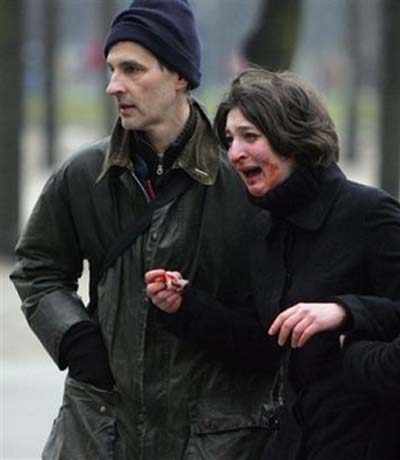 NOTE: the riots this time are about the CPE (contrat de Premier Emploi or First job Contract). From Franc-Echos, le blog in English, we have some photos of the riots. You can also see NO PASARÁN: Paris Riot Watch.

You can also see the "communiqué" of the Union Action Police:

The ‘casseurs’ (destroyers) of the ghettos, who are the same as the rioters of November 2005, are organizing themselves through Internet blogs to call to insurrection during the anti-CPE demonstrations that are planned for Tuesday in the afternoon, starting at the Place d’Italie in Paris. 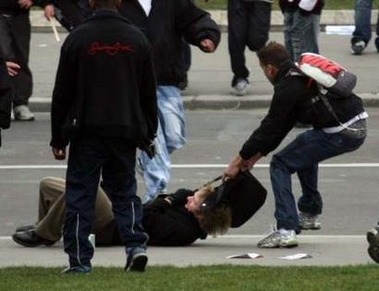 Those blogs are calling to destroy “Jews, Whites and riches”. You can also read on those blogs: “France must be burnt, as Hamas will burn Israel”. It is obvious that the racial and religious violence will reach a new level this afternoon. Having noted the severe lack of security in the last police devices, and the different concepts of order among the different actors, it will be very hard (¡!) to keep public order. We recommend to the more vulnerable not to go to this protest, and to the demonstrators to remain in compact groups.

This is marvellous hein? But then there are people who accuse Whites of being racists. My goodness… 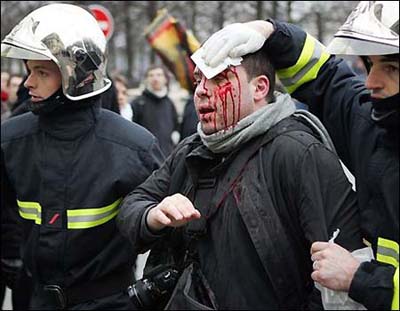 UPDATE: I was forgetting about this piece of news my colleagues over at Eurabian News have posted: destruction of the Christian inheritance in France (I translate the most important part of it).

Translation: Vandalic hords have penetrated in the École de Chartres, that depends from the Sorbone, have taken and thrown into rubbish after in the streets, even burnt in front of the Sorbona's chapelle, documents of the Paris abbeys andof others from the surroundings. They are offic¡al documents and of private law from the Middle Ages, more than 10 centuries old in some cases.

You can also read it at France-Echos: le blog in English.
And last but not least: 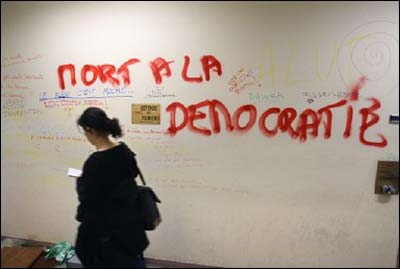 Death to Democracy! cries this painting. This is really worrying, worrying indeed. Not only because it's France but also because France is a part of Europe.

36% of Swedish Muslims have Anti-Semitic Attitudes

With a Swedish Muslim population of 350 000, that would mean 136 500 Muslims in Sweden, (just less than half) hold anti-Semitical views. Simply staggering, that in the middle of liberal Scandanavia, such inotlerant views have taken root. One contributing factor to this anti-Semitic phenomenon is the role of the local Mosque as well as the Swedish judical system .

As I have noted earlier, a Swedish Chancellor of Justice has refused to press charges of incitement against a Swedish Mosque for selling tapes that degrade Jews. An official Swedish sanction of Islamic anti-Semitism is a total outrage, and as this study by Henrik Bachner shows, the numbers are staggering. KGS "

Lisa Abramowicz, chairperson of the Information Committee of the Jewish community in Stockholm, and secretary-general of Swedish Israel Information, told the European Jewish Press, “The results of the report are not surprising. We knew that anti-Semitism, the world’s oldest prejudice, still lives and thrives in Sweden. “What is surprising is that so many ethnic Swedes are so unaware of their own prejudices. There is a widespread feeling among Swedes that unless they are members of right-wing extremist or neo-Nazi groups, they have no prejudices against other religious or ethnic groups,” she said.

Read on at Tundra Tabloids.

Photos from a US anti-war demonstration

Well, I am astonished: