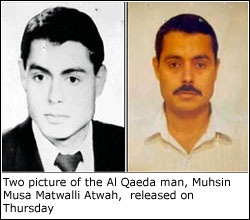 You can read about it here

Nine militants, including a top Al Qaeda operative carrying a bounty of $5 million on his head, have been killed in an air strike six kilometers from here, senior security officials said.

Muhsin Musa Matwalli Atwah alias Abdur Rehman alias Abu Muhajir, wanted by the US for his involvement in the 1998 bombings on American embassies in Nairobi and Dar es Salaam, was killed in an attack on Wednesday night, the officials said. The 41-year old militant was said to be from Egypt.

“His death has been confirmed,” officials working for different agencies said. “The confirmation is based upon multiple intelligence sources,” one of them said.