Abu Laban is the “Godfather” 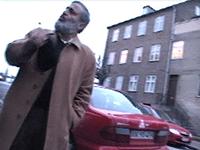 i, the journalist who broke the news of Imam Ahmed Akkari’s death threats against Naser Khader. Imam Abu Laban is speaking of a man who plans to execute a martyr operation in connection with the Battle of Khartoon:

{He’s doing everything to get contacts.}
{He’s contacted Amr Moussa and he means to wreak absolute havoc.}
{He wants to join the fray and turn it into a Martyr operation right now.}

MALE VOICE: Even though we do not know of whom Abu Laban is speaking and where the martyr operation is supposed to happen, the politicians do not like the sound of things.

(in the picture we see Abu Laban efore entering the car where he spoke the words that already now spell the doom of his career as a spokesman for Moslems and a citizen of Denmark.
HT: Agora.

Agora says also that Danish politicians are shocked. Well, from one point of view, is normal. But after knowing the Akkari-Nasrem case I am not the least surprised.

Go over and read it. The post -excellent as ever- has also a very good point about the reactions from politicians. I am not the least surprised that Sifaoui has called them extermists. But says they are worse than terrorists:

I have never suggested that Abu Laban or Ahmed Akkari are terrorists themselves – in the sense that they’re bombers. They’re something much worse: They’re the the ideologues which give the young mad-man the necessary excuse – the ideological grounds – for carrying out an act of terror in Denmark.”